The apricot is the fruit of the Prunus Armeniaca, a tree in the Rosaceae family, originally from Asia (on the border with Russia) and introduced into the Mediterranean basin during the Roman era; here its cultivation was expanded and consolidated by the Arabic people, who gave the fruit its name (from the Arabic Al-barquq).

In the wild, the apricot tree can reach a height of up to 13 metres and has pink flowers, similar to those of its relations cherry, plum and peach; it regularly fruits during the summer (June to August).
The fruit (or drupe) of the apricot varies in colour from egg yolk yellow to deep orange, sometimes speckled with red, and has a slightly velvety skin.

The name of the percoca peach is derived from the Italian word “albicocca”, although it bears no relation to it apart from the colour of the flesh. It is not a hybrid between peach and apricot, as many people believe.

In the United States a hybrid fruit called the Pluot (plum + apricot) was recently created: a cross between the two, it has red flesh and yellow skin mottled with red. Its appearance has also led to the nickname “dinosaur egg” and, in Italy, the unfortunate name of “prugnocca”. 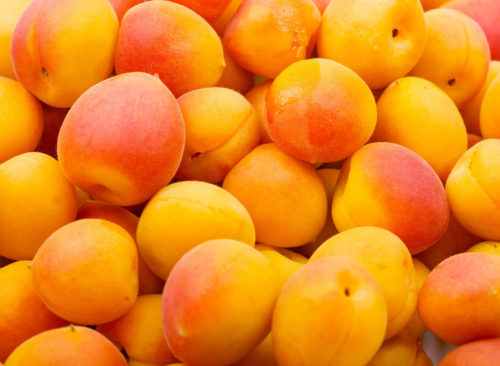