The artichoke is a herbaceous plant of the Asteraceae family, typical in the Mediterranean area.
Artichokes, probably in the wild version, were known and sought-after in Roman times, and appear to originate in the domestication of the wild thistle, likely to have originated in Sicily.

Depending on the presence of spines, artichoke varieties are divided into spiny and smooth; the former include Spinoso Sardo and Spinoso d’Albenga, while the latter include Mammola Verde and Romanesco.

The edible part of the artichoke is the flower head, or tender bud, before it opens completely.

The introduction of the artichoke to the Americas by Spanish colonisers led to the spread of this thistle in a habitat where it did not exist and has become a genuine plague; a classic example of an alien species introduced in a new habitat and altering the natural equilibrium. 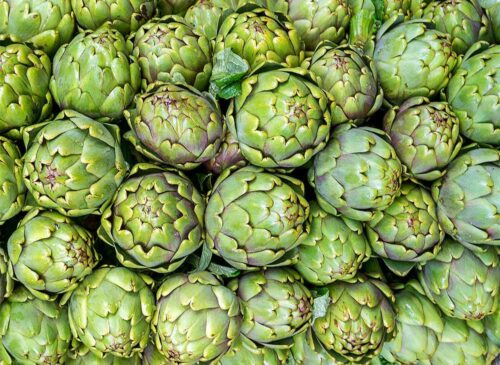