The aubergine is a herbaceous plant in the Solanaceae family, with large elongated leaves, large flowers in shades of purple (but also white) and fruits whose shape varies from round to pear-shaped, oval or elongated, in a purple which can be very deep, almost black.

Originally from India, the plant was brought to Europe by the Saracen invasions in the 5th century, but began to gain success in the kitchen only during the Renaissance, becoming a key element in numerous traditional recipes, especially in southern Italy.

In one of his 16th century treatises, the botanist Mattioli referred to the aphrodisiac properties of the aubergine, writing: “In Italy it is customary to eat these fruits to stimulate lust…”

In American English the aubergine is known as eggplant, because some varieties cultivated in the 18th century were yellowish white in colour and similar in shape to a goose egg. 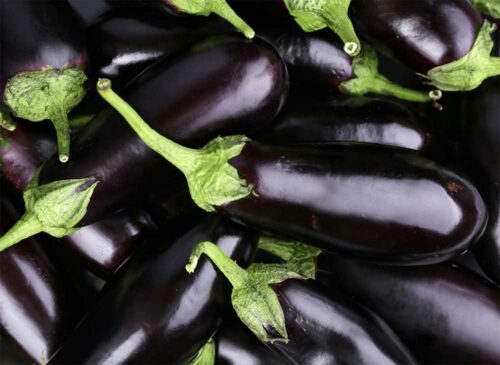