The chestnut is the fruit of Castanea Sativa, a tree of the Fagaceae family, typically grown on mediterranean hillsides. The edible part of the chestnut is the seed: the fruit is actually the spiny outer case.
There are a huge number of chestnut species; more than 300 in Italy alone. They are generally divided into two groups, marron and domestic chestnut.

The chestnut is thought to have originated in Greece and been imported to Italy in Roman times. However, this hypothesis is contradicted by the fact that the chestnut is a wild plant, so there was no need to import it.
There is certainly evidence of the consumption of chestnuts – often in the form of flour – since ancient times.

The Romans considered chestnuts “shepherds’ food”, although in fact their use was widespread at all levels of society.

Until the 17th century chestnuts were thought to be harmful to health; this was probably because of the stomach ache they cause when eaten in excess. 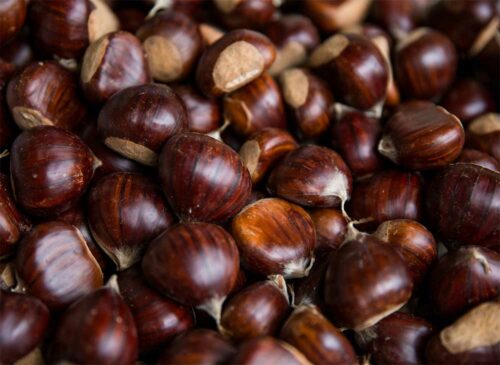