The mushroom is a singular kind of vegetable belonging to the Eumycota family.
The porcino is a member of the Boletus family, characterised by the presence of tiny tubes under the cap, which give the appearance of a sponge; the cap is also easy to break off the stalk.

Mushrooms have been eaten since ancient times, with the tragic consequences one might imagine, given that every species has some level of toxicity and some are positively lethal.

The porcino grows spontaneously in many areas of Italy and other countries; the mushrooms found in chestnut forests have a distinctive reddish-brown colour, while those found in beech and fir forests are paler. Porcini from oak forests are particularly delicious, although very rare, like the oaks themselves.

Usually the lower the latitude, the better the mushroom. At least, that’s what the gourmets say.

In ancient times they believed that cooking fungi with pear stalks, bread, garlic and vinegar counteracted any poisonous effects. Such beliefs were obviously completely unfounded, but are evidence of the passionate determination that has driven humans to eat fungi through the centuries, despite the known dangers. 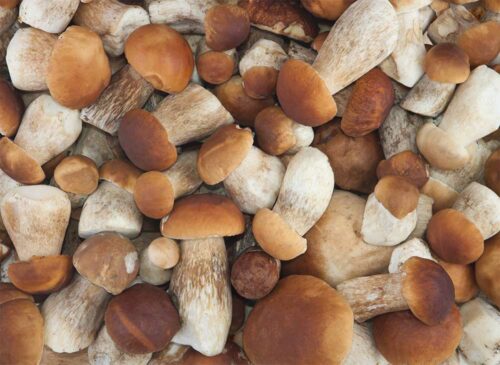