Squash is a herbaceous plant with very long runners, large leaves and fleshy berry fruits in a wide variety of colours and sizes. The various families of squash grown in Italy (Cucurbita Maxima, Moschata and Pepo) include the varieties most commonly used in the kitchen (the wrinkly greyish Marina di Chioggia, also called “zucca barucca”, the yellow Mantovana with its green rind, and the Lunga di Napoli).
The courgette also belongs to the Cucurbita Pepo family. This family of squashes was imported from the Americas; they did not exist in Europe until the 16th century.

The Lagenaria Vulgaris family, on the other hand, were imported from India centuries before. This family includes the squashes known as bottle gourds, because once dried and hollowed out, they can be used as containers.

The whale squash, used only as animal feed, can reach a weight of 50 kg. 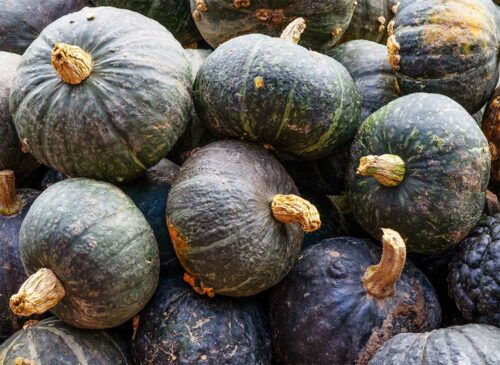